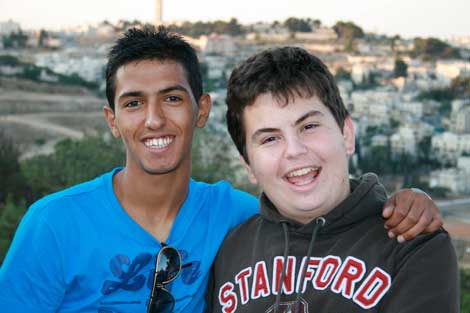 A JITLI Experience to Remember. One of my favorite moments that I had on JITLI was swimming with my Bedouin friend Feruz. It was a hot day in July, and all of us American and Israeli Jews were eager to jump into a pool to cool off. While the Bedouin boys jumped in immediately, the girls appeared to be reluctant to enter. I saw that Feruz was standing by the side of the pool simply staring at the water. When I asked her what was wrong, she told me that she had never learned to swim. There was no pool in her village that she could practice in. After some effort, I convinced her to get into the pool, where I would teach her how to float. Slowly, she stepped in. I held her gently and let her lay in the pool on my hands, showing her how to relax in the water and to calm her breathing. We practiced like this for quite a while, to the point where she almost floated all by herself. At the end of the day, Feruz thanked me gratefully for helping her gain a new skill. The excitement that I saw in her eyes is an image that I will never forget.