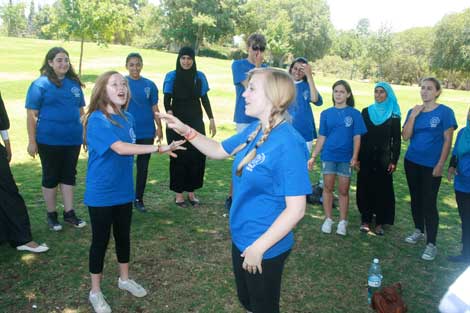 My Hebrew teacher first introduced me to JITLI, a program where ten Jewish teens from San Diego go to Israel with ten Israeli Jews and twenty Muslim-Arab Israelis to learn about the cultures, history, and conflict of the land. I grew up in a Jewish world. I went to Hebrew school and learned about the Western Wall in Jerusalem. When I finally went to Israel, the food was delicious, the cities were full of life, and the landscape was breathtaking. It became my own picture, my “beautiful Israel”. There was no way that I thought I would do the JITLI program – it might ruin my picture with politics and war – so I declined my teacher’s offer. That year I read the novel The Kite Runner by Khaled Hosseini. I was captivated by the rich culture that thrived in the city of Kabul before occupation and civil war consumed the country; I had to read more. After many more books about the Middle East I was hooked. I applied to JITLI, hoping that it would facilitate the growth of my new passion, and was accepted. The first day of the trip was without a doubt the most awkward day of my life. The group of forty gathered in a circle to start the program. Looking at the seemingly intimidating group of Arab kids around me, I realized what I had gotten myself into. That night I sat in a room with a Muslim girl and a Jewish girl, both Israeli. While they talked to me individually, they refused to acknowledge the other girl’s existence. Finally I found the purpose for my presence, and things changed quickly. By the end of the first week I was walking toward the Western Wall, holding hands with Byan – an Arab girl. As we walked through the gates it hit me – I was home. Suddenly, a group of Jewish women came at us, screaming, threatening to kill us. Byan and the other girls began to cry. My picture – my beautiful Israel was shattered. I was ashamed of my people and this place I had once called home. It took the next two weeks, but piece by piece my picture was repaired. Days later, the Muslim call to prayer came on over the loudspeakers in Acco. Yuval, a Jewish girl, jumped up frightened. She explained that the sound of the loudspeaker was similar to the sound of the sirens in her town when a rocket was approaching. Rafat, an Arab boy asked her if she hated all Arabs, and she said she did but only in her lowest moments – when she fled to the bomb shelters, and when her father left for war. By the end of the trip the picture was complete again, but my beautiful Israel looked very different. It was a home for both Yuval and Byan. JITLI changed the way I live and how I look at things. I’ve found that behind the backgrounds and religions, people are individuals. One day I will solve the Israeli – Palestinian conflict, and show the world my beautiful Israel.