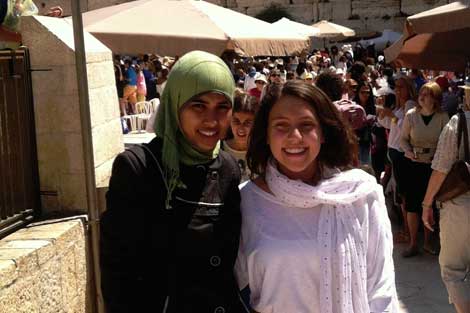 I joined JITLI to learn about this “conflict” everyone is always talking about in the land I call home, and during our weekly San Diego meetings, that’s what I learned about. We learned about the conflict that the whole world has access too. Every Wednesday night I would scan Israeli news sights looking for a suitable current event. We would discuss whether we “strongly agree” or “strongly disagree” on various hot topics not only in Israel but in the US as well. As I stepped onto the airplane on my way to the land I call home, I knew my facts and my history very well. But that wasn’t very JITLI of me.

I quickly learned what being JITLI was all about.

If I had to pick an experience that shows what JITLI is all about for me, it would be my life-changing day visiting the Holy Sites in Jerusalem. After being partnered up, Reham and I began holding hands, which was something we quickly learned made us each feel safe. While waiting in line to enter the Temple Mount, Reham wrapped my hair in a Hijab. Once we were given free time on the Temple Mount for our partners to show us around, I had the best history lesson I could have asked for, the Temple Mount through the eyes of Reham; a teenage girl from Lakyia, a Muslim, my best friend. Sure I learned about the history of the Al-Axa Mosque, but I also learned that Reham and her family come to Jerusalem often, and share their Ramadan meals with the poor on the Dome of the Rock plaza. And sure I learned the story about Muhamad flying from Mecca to Jerusalem on a horse and ascending to heaven from the Temple Mount, but I heard it from a girl, just like me, who believed it with her whole heart. Reham and I were then convinced to try to sneak me into the Dome of the Rock. With my fellow San Diegan Ana by my side, Reham quickly taught us how to enter one of the holiest places in Jerusalem, if not the world. Before we knew it, Ana and I had successful entered the Dome of the Rock. Both of us, shaking and scared, were given a tour by Reham, and Ana’s partner Suha. We placed our hands where Abraham had once placed his, and stood under the Rock that is a major component in the conflict.

After barely having time to get over the shock and excitement of sneaking into the Dome of the Rock, we were already at the Western Wall, or the Kotel. I had told Reham that I brought paper and a pen to write a note to put in the Wall, and she immediately smiled and asked for a piece. After I taught her how to fold up the paper, we found a spot at the Wall where we could both fit. We placed our notes, and I asked Reham if she wanted to learn the Shema, and she smiled and said yes. Each of us had one hand on the Wall, and while looking in each other’s eyes the whole time, Reham repeated after me, and had said the Shema. The looks we got while walking away didn’t matter. The tears in our eyes and the warmth between our interlocking hands did. That was the day that I truly understood what it means to respect someone and receive respect in return.