When I was originally accepted into the JITLI program I was overwhelmed with the daunting task of spending three weeks in a country with thirty absolute strangers. But as the meetings progressed and I saw how fast ten strangers could turn into the “San Diego family” I realized that it was possible to develop friendships, but would it be possible to do it with twenty people you feel might hate you and everything you stand for. While developing friendships were on the bottom of my list of reasons for signing up for the program, the reason why I signed up for JITLI landed up being all about friendships. The reason why I signed up for the program was to formulate my own opinion on the Arab-Israeli conflict. I was tired of hearing two very biased media perspectives being shoved down my throat. I figured that as a Jew and an advocate for Israel it was about time to live the conflict. I don’t believe that there is a more authentic and legitimate way to gain valid insight into the conflict other than participating in JITLI.

When I landed in Israel for the first time in my life I was overwhelmed with emotions. It was hard to process the fact that I was standing in a land of thousands of years of heritage and simultaneously standing in a country that an entire world is fighting for or against in some way. As I was walking from the terminal to baggage claim I had the epiphany that the only for me to truly see whether or not the current conflict was being fought because of politics or religious motives was to forge friendships with both the Arabs and Israelis, make myself vulnerable, engage in genuine friendships, and find out the real story behind the conflict and each parties motivation for their involvement.

The first time I truly felt that I had experienced a milestone on my adventure to insight was at Yadvashem, the Holocaust museum in Jerusalem. At first I was very hesitant to enter the museum with a culture that may have no clue what the holocaust was, and perhaps consequently, no sympathy or respect to those who have been affected by it. Oh boy was I in for a shock. As a Jew and having attended a Jewish school in my life I have been told stories of the holocaust and been to several museums throughout my life. But all of my previous experiences combined, wouldn’t amount to the impact this day at Yadvashem would have on me.

As we started the tour we were bombarded by hundreds of horrific images of this tragedy, while it incredibly disturbing, I was somehow able to maintain my composure. But in the blink of an eye, while watching footage of parents dig their children’s grave while proceeding to watch them each take a bullet to the back of their head, I immediately lost all sense of composure and broke out crying. Now take into account I was the 6 ft. 4 football player. No one expected this to come from me. But what moved almost as much as the atrocious video I had just seen where the three Arabs who refused to leave my side. While an arm around my shoulder or a hug wouldn’t have meant much, the fact that all these people who I felt considered me their enemy were reciprocating an overwhelming amount of respect to those affected by the holocaust was eye opening to say the least.

It was at that point on the trip that I realized Jamal, Rafat, and Muhammad weren’t so different than I was. But moreover, they weren’t the Jew hating Arabs society portrays them to be. I realized that at the end of the day, we all want peace, we all want to be friends, but when society embeds with a satanic like image of your neighbor, peace is impossible. The only way for peace to ever take place in the Middle East is for one party to lend an outstretched arm to its enemy, and for the enemy to receive their helping hand in good faith and with an overall positive societal reception. But right now the mentality of love thy neighbor as thy self has been clouded by radical regimes and ignorance. JITLI is about breaking those unfortunate misconceptions replacing them with a far more compassionate and empathetic mentality. 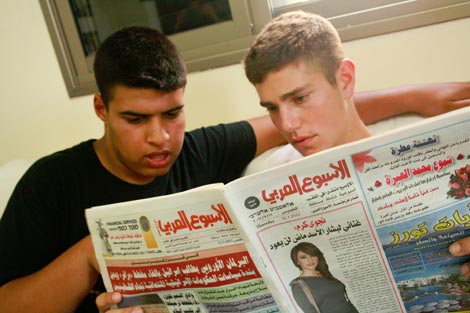