It was my first time in Israel and I didn’t know what to expect. After a whole day of travelling I landed in the airport feeling fatigued but excited. Our group made it through customs and we were greeted by a mob of yelling people holding balloons and waving signs, 30 people of different race, religion, and cultural backgrounds in a time where relations between our different groups were shaky at best, and I had never felt more welcome before in a place that was so foreign to me. I said hello to everyone I could and tried to remember the flood of names that was flowing through my ears, but there were two kid who particularly stuck out in the group. Their names were Ihab and Tamer and before we even knew anything about each other they made me feel at home. We knew nothing about each other’s race, ethnicity, or personal background when we first greeted each other, but after a whole day getting to know one another, it didn’t matter to me how they felt about the border surrounding Israel or the checkpoints that some people had to pass through on a regular basis because I had made 2 new friends that I will hopefully keep for the rest of my life. That’s when I knew that I was going to have one of the greatest experiences of my life.

Throughout the trip I made 30 new friends, came closer to the nine San Diego participants I bonded with before the trip, and participated in events that could not happen anywhere else at any other time in the world, but the most significant thing that happened to me during the sixteen days was that I grew from a timid and shy kid who rarely talked in front of people he did not feel comfortable around, to someone who could more easily open up to others and learned to speak his mind on a more frequent basis. I had essential broken out of my shell during the JITLI trip. Before the trip my time in San Diego was spent gravitating mainly towards my friends and I was always hesitant to meet new people. But on the trip I forced myself to go outside of my comfort zone because I knew that I would never get another opportunity like this ever again. The trip helped me realize that I should never pass up on an opportunity to meet new people since I could be depriving myself of a chance to get to know someone awesome that I might never be able to see again. JITLI was an amazing adventure not only because I experienced some of the greatest moments of my life on the trip, but also because I had undergone one of the biggest changes to my personality during my journey throughout Israel.

Every new year of JITLI is a completely different experience from the one before it. While the events each group experiences are all relatively similar, how each one of the forty kids chooses to go about the varying events that they are put through during the trip are what make JITLI the trip that it is. I put myself outside of my comfort zone, made a ton of new friends, and visited the holy land for the first time in a way that most people will never be able to for as long as they live, which made the trip a better first visit to Israel than I ever could have hoped for. 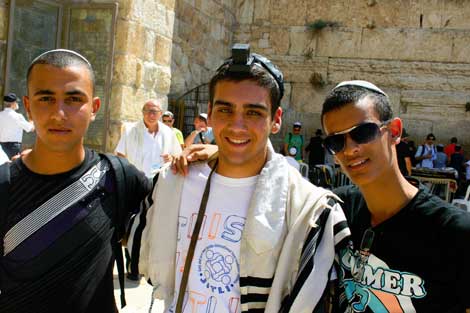