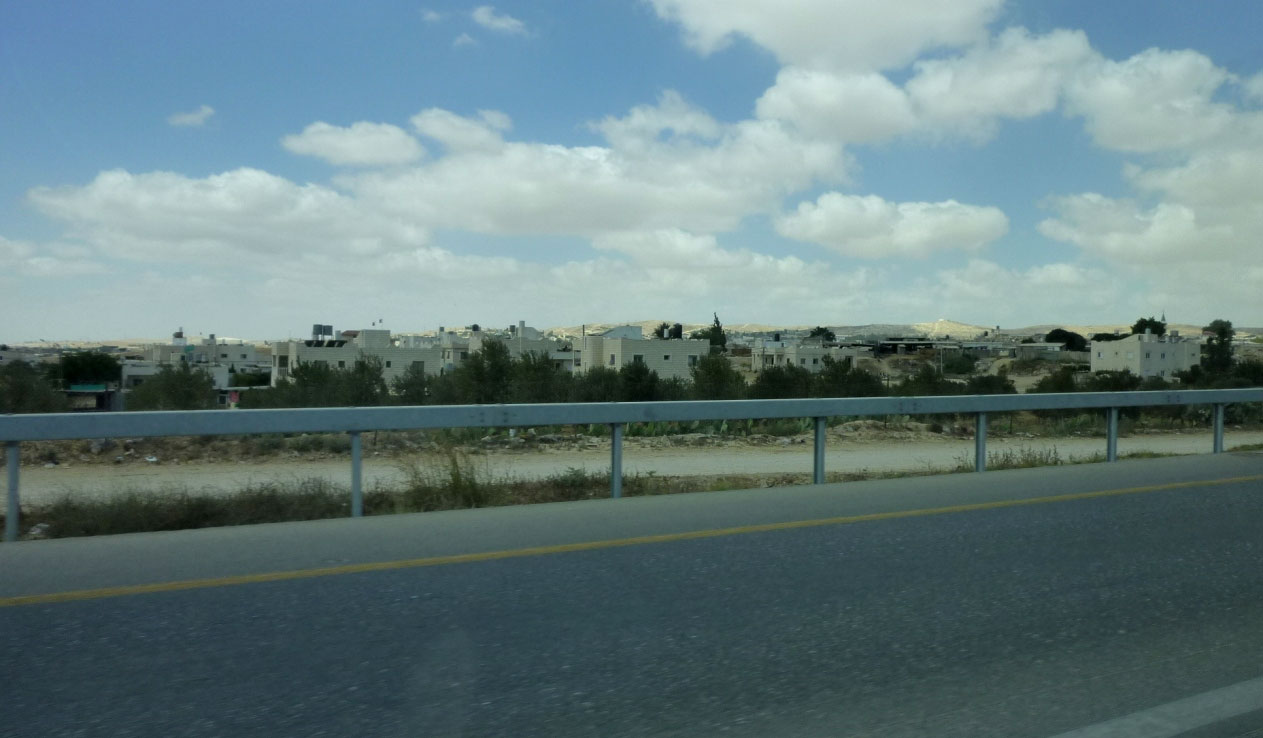 Lakiya, or Laqye is a Bedouin town (local council) in the Southern District of Israel.

Lakiya was founded in 1982 as part of a government project to settle Bedouins in permanent settlements. It is one of seven Bedouin townships in the Negev desert with approved plans and developed infrastructure (other six are: Hura, Tel as-Sabi (Tel Sheva), Ar’arat an-Naqab (Ar’ara BaNegev), Shaqib al-Salam (Segev Shalom), Kuseife (Kseife) and the city of Rahat, the largest among them).

There are several Bedouin clans residing in Lakiya, al-Sana – the biggest among them. Other families are: Al-Assad, Abu Ammar and Abu Maharab. Some clans don’t live inside Lakiya, but on the territory adjacent to it.

In 1999 first elections to the local council were held with Sheikh Ibrahim Abu Maharab to take the chair of the council head, later succeeded by Khaled al-Sana.

Prior to the establishment of Israel, the Negev Bedouins were a semi-nomadic society that had been through a process of sedentariness since the Ottoman rule of the region. Most researches agree that Bedouins arrived to the Negev around 1800 AD, but there is evidence of earlier migrations as well.

During the British Mandate period the administration didn’t provide a legal frame to justify and preserve lands’ ownership. In order to settle this issue, Israel’s land policy was adapted to a large extent from the Ottoman land regulations of 1858 as the only preceding legal frame. Thus Israel nationalized most of the Negev lands using the state’s land regulations from 1969.

Israel has continued the policy of sedentarization of Negev Bedouins imposed by the Ottoman authorities, and at first it included regulation and re-location – during the 1950s Israel has re-located two-thirds of the Negev Bedouins into an area that was under a martial law. The next step was to establish seven townships built especially for Bedouins in order to sedentarize and urbanize them by offering them better life conditions, proper infrastructure and high quality public services in sanitation, health and education, and municipal services.

But not all Bedouins agree to move from tents and structures built on the state lands into apartments prepared for them. In permanent planned villages like Lakiya lives about 60% of Bedouin citizens of Israel, while the rest in illegal homes spread all over North Negev.

Process of sedentarization is full of hardships for any nation, since it means a harsh shift from one way of life to another – transition from wandering to permanent residence, and Bedouins whose society is based on tradition are no exception. The rate of unemployment remains high in Bedouin townships, as well as crime level. School through age 16 is mandatory by law, but the vast majority of the population does not receive a high school education. Women are discriminated in the patriarchal-type Bedouin society. There is another serious problem of trespassing on state lands and building unrecognized Bedouin settlements having no municipal status and facing demolition orders.

Yet Israel’s attitude towards its Bedouin citizens has always been positive. The state uses all the means at her disposal to improve the life of the Negev Bedouin community, and Lakiya is considered to be one of several flagship projects in this sense. Unlike illegal villages with scarce access to water, electricity and services, this village provides the residents with all their basic needs.

But problems here still remain. As of December 2009, the town has been ranked lowest (1 out of 10) in socio-economic standing, with an average income of 4,360 shekels to the national average’s of 7,070. Only 58.2% of grade twelve students are eligible to graduate from high school.

Despite the fact that unemployment level among Negev Bedouins is high, there are several employment opportunities in the region. Several industrial parks are situated in the area – Beersheba (it’s a big city), Hura, Idan haNegev and Rahat. There is a number of Bedouins working in the area of service inside Beersheba, as well as in the area.

There are several organizations carrying out different activities aimed at supporting and expanding entrepreneurship in Israel’s South in order to further integrate the 160,000 Bedouins living in the Negev into Israel’s mainstream economy. They are primarily aimed at Bedouin women.

Twenty Arab-Bedouin women from the towns of Rahat, Lakiya, Tel Sheva, Segev Shalom, Kuseife and Rachma participated in a sewing course for fashion design at the Amal College in Beer Sheva, including lessons on sewing and cutting, personal empowerment and business initiatives.

The Lakiya Negev Weaving Project was founded in 1991, it’s aim is to empower Bedouin women of Negev by applying their traditional weaving skills to the manufacture and sale of woven products. It is based completely on the unique Bedouin heritage passed on from mother to daughter. Approximately 130 Bedouin women are involved in this project in all the stages of the production from initial wool treatment, weaving the rugs, cushion covers and pouches, and selling. These women were provided guidance, professional consulting and hands-on assistance in the fields of marketing, branding, sales, the business’s organizational structure and business plan, fundraising and networking. The project’s aim was to make it a successful, profitable and financially independent cooperative business. It is about to succeed – several retailers and chains sell Bedouin traditional ground-looms all over Israel, including Haifa, and also abroad. A new visitors’ center will be open soon but it has already become a tourist site.

Another tourist site is called the Desert Embroidery project. Some 20 women completed their professional entrepreneurial and business training and guidance and initiated a project based on the design and production of the traditional Bedouin costume jewelry. They are producing this embroidery at home with traditional Bedouin motifs and decorations. The women also hold Bedouin embroidery workshops and events based on the Bedouin tradition. Their workshop is also a visitors’ center and it is a famous tourist attraction in the area.

There is a number of schools in the township and a communal activity center.