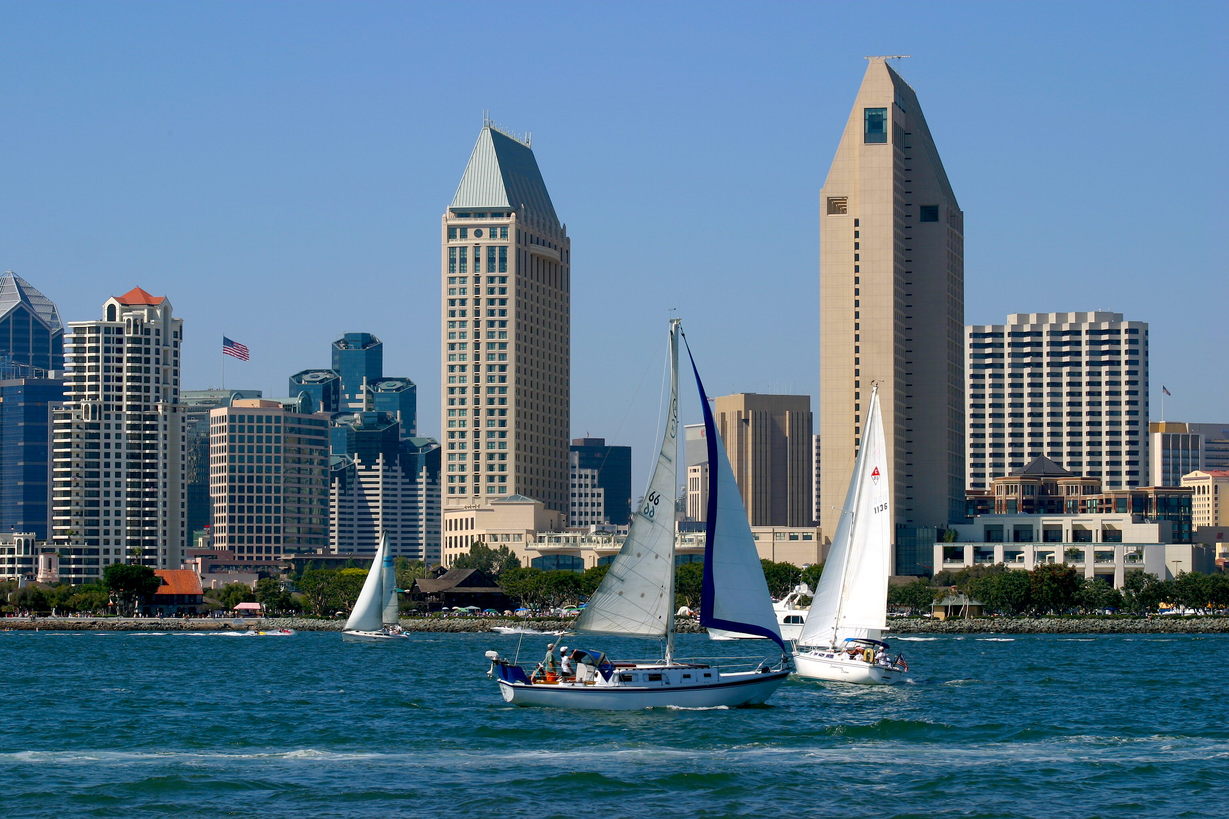 San Diego is located in the Southwestern corner of California, the most Southwest state in the contiguous USA. The magnificent Pacific Ocean lies to the West, the Mexican border defines the Southern extent of the city, the mountainous deserts begin in the East, and Los Angeles is only 100 miles north. As the eighth largest city in America, San Diego can be noted for its fair weather throughout the entire year, which allows for a good time when visiting its beautiful beaches and local landmarks.

The city was named after the feast of San Diego de Alcalà by the European discoverer Sebastián Vizcaíno who entered the city’s bay in 1602. Influenced heavily by the Spanish, the city resonates its Hispanic heritage through cities’ and streets’ names and old monuments. In 1769, the Mission Basilica San Diego de Alcalà became the first of 21 Spanish missions (churches) to be established throughout the coast the California. Once America possessed California after 1848 (the Mexican-American war), the city was designated as a naval town. Today, there are a number of active military institutions which recognize that fact. There is the Marine Corps Air Station Miramar, also the site of the famous tourist aviation show, the Blue Angels. On its own separate island of Coronado, connected by the notable Coronado Bridge, the North Island Naval Air Station is another location. San Diego is also proud to be the location for the training of the Navy SEALS. The San Diego Bay is filled with many educational and tourist locations such as the aircraft carrier, the USS Midway, and the sailboat, The Star of India.

Mission San Diego de AlcalàOne of San Diego’s most noteworthy charms is Balboa Park – a large and spectacular garden of flourishing culture and art. Balboa Park features museums, flower gardens, concerts, an IMAX theatre, restaurants, and of course, the world-famous San Diego Zoo, where one may find beautiful baby pandas, safari animals, and birds of prey, to name a few.

In addition to the Zoo, San Diego takes into consideration its ocean by having one of only a few Sea Worlds in America. Sea World is an aquatic amusement park where one may find a number of marine animals as well as rides, food, and entertainment. Shows usually include animals such as whales, dolphins, and seals; the most famous show being Shamu, the Killer Whale. San Diego also holds the Wild Animal Park and Birch Aquarium.

The ocean serves a great purpose for San Diego’s many residents and tourists. Mission Bay and San Diego Bay are locations for aquatic sports such as jet skiing and sailing. Perhaps the most notable beach is La Jolla Cove, a beach uniquely shaped by rocks and tidepools where seals have found a home. One of San Diego’s greatest attractions is whale-watching. Beautiful whales pass by San Diego while migrating from Mexico to Alaska and back every year.

Other notable locations include: Downtown, a cultural center that offers entertainment and a wonderful nightlife. One unique event is the music festival Street Scene, in which a number of blocks in downtown are actually closed off for the event. Petco Park serves as the home for the national baseball team, the San Diego Padres and Qualcomm Stadium is the home for the national football team, the San Diego Chargers, and the location for the Super Bowl in 2003 and in 1998.

The Mount Soledad Cross is a Korean War veterans’ memorial at the tip of Soledad Mountain holding incredible views in all direction of San Diego. However, it is a topic of much religious and legal controversy.

The last location to mention is JITLI’s home base. The Lawrence Family Jewish Community Center, JACOBS FAMILY CAMPUS (JCC) is probably the most communal Jewish institution in all of San Diego. Besides having its facilities used for events, such as JITLI, the center sponsors such events as the San Diego Jewish Film Festival, the San Diego Jewish Book Fair, the New Jewish Plays Project and the Celebrating Jewish Music Concert Series. Visitors can also enjoy its Judaic library and the exhibitions at its Jewish Art Gallery. Here, Jews can come together and enjoy programs for new Jewish babies, new Jewish residents of San Diego, and entertainment for little kids.