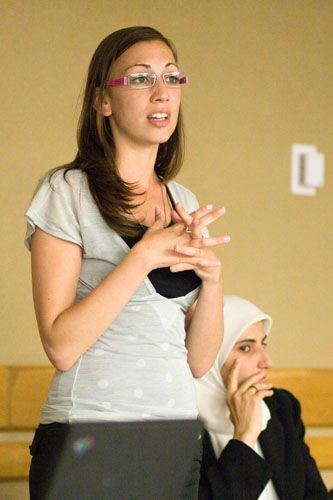 A group of Israeli and Palestinian youth activists spoke at UCSD last week as part of an effort to spread a message of peace for their embattled home region and advocate a two-state solution to the ongoing Israeli-Palestinian conflict.The OneVoice movement, an international nonpartisan grassroots organization, stopped in San Diego on April 24 for the final leg of its Southern California tour. Sponsored by the Americans for Informed Democracy and the Organization for Muslim and Jewish Awareness, the event allowed OneVoice to spread awareness about ways to promote peace in the region.

OneVoice representative Laurel Rapp said it is not always clear to people outside of Palestine and Israel that the region’s inhabitants want to arrive at an agreement through nonviolent means.

In order to further their goal of spreading this sentiment, the organization seeks to acquire one million signatures by the end of the year from those sympathetic to the cause in order to demonstrate to the leadership and people on both sides of the conflict that demand for peaceful resolution exists among those affected by the situation.

“The majority [of Israelis and Palestinians] want to achieve resolution nonviolently,” Rapp said. “There are about 300,000 Israelis and 300,000 Palestinians who have signed the OneVoice mandate. Our goal isn’t to change people’s minds but to start a thinking process. It’s already what most people want and we’re just amplifying the voice of the Palestinian and Israeli people.”

Shani Gershon, a OneVoice representative from Jerusalem, spoke about the challenges she faces in Israel while handing out pamphlets that publicize the organization’s mandate.

“They would read it and say it’s great but wouldn’t want to sign because they thought the Palestinians would not sign it,” she said. “What motivated them was that I told them I had a Palestinian counterpart saying the exact same thing.”

Co-president of OMJA and Eleanor Roosevelt College sophomore Marina Triner, who lived in Israel, said that as an American student she has had the opportunity to view the Israeli-Palestinian conflict from a point of view to which she would not otherwise be exposed to.

“I believe it’s my duty to impact the situation in my home country because I am removed from the events that are taking place and can think clearly and understand that Muslims and Jews are alike and that they must begin to communicate,” she said.

Rapp said that OneVoice differs from other conflict-resolution groups in that it does not strive for immediate peace, but rather works to mobilize people to demand more of the region’s leaders.

“When you hear ‘peace group,’ you sideline them in a box because some are unrealistic, but [OneVoice] is more neutral,” she said.

Triner said that one of OneVoice’s primary goals is to influence members of the youth demographic, who will eventually inherit the problems that exist in the region today.

“As young people, we have the passion and energy to make a change, and to show other people our age how much they can do for the world,” Triner said. “It’s our responsibility to make these things happen. Too much blood has been spilled already and it needs to end.”

“Being informed is important for everyone, not just for those with direct family or religious connections to the conflict,” Nair said. “In general, as college students, it is easy to be insulated in our own world and stay apathetic to the news, but these issues affect people worldwide and it’s important to think about their impact.”