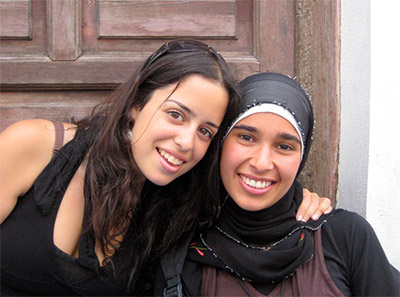 While Jerusalem’s Western Wall is on the itinerary of nearly every Israel group tour for teenagers, the Temple Mount above it is defintely not. So it was a bit strange to see about 90 teens wandering through the courtyard of Al-Aqsa Mosque last week, as part of their two-week tour of Israel.

The group wandered casually around one of the world’s most-disputed religious sites. A guide spoke about Abraham and Mohammed, and some of the visitors took group photos against the background of the Dome of the Rock. Nearby, extreme right-wing activist Baruch Marzel was leading a group of children.

The Gary and Jerri-Ann Jacobs International Teen Leadership Institute (JITLI), now in its eighth year, brings together Jewish teens from Mexico and the U.S., and Jewish and Muslim teens from Israel.

The aim of the program, as with others of its kind, is to break down stereotypes and foster relationships between people who would otherwise never have met.

Each summer, the group visits the Temple Mount during their day in Jerusalem’s Old City.

“Coming here is considered strange, and it certainly isn’t on the agenda of other groups like birthright,” program director Yaacov Schneider said. “It’s a matter of image, of security concerns. You tell people you are going to the Temple Mount and they think you’re crazy. For other groups, this is a tourist spot that you just point to [from the Western Wall plaza below]. But for us, this is a must. If you are dealing with the most intimate aspects of a person’s identity… if we want to understand each other, we have to visit here, just as we need to visit the Western Wall.”

The group arrived in Israel last Sunday, after a one-week tour of southern Spain that focused on the history of the Golden Age of Muslim-Jewish coexistence in the Iberian Peninsula.

JITLI immerses its young participants, who represent various sides of the conflict, in an intensive workshop on identity and history. The hope is that these potential leaders in their respective communities can build friendships that will ultimately help bring peace to the region.

“As a businessman, it’s too risky an investment,” one of the program’s sponsors, David Shternberg, admitted. “But here, it’s okay. I’m not trying to make money.”

On the Temple Mount, the group heard stories of Mohammad and Gabriel, together with those of Abraham and the sacrifice of Isaac. They read from the Bible and recited suras from the Koran. When the Muslims into the group went into Al-Aqsa to pray, their Jewish counterparts lounged under the trees and enjoyed the late-morning tranquility.

“We wanted to show these kids where it all started,” said Geri-Ann Jacobs, who founded the program with her husband. “Here, they experience something they’ll remember. This isn’t political; this is educational. We’re starting with the past and continuing with the future.”