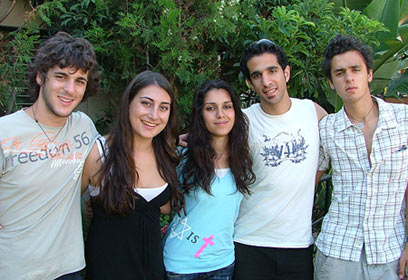 What do an Israeli kibbutznik, a Jewish-American princess, a boy from an unrecognized Bedouin settlement, and an adolescent from Mexico have in common? Allow us to introduce David from Mexico, Ala Zahalka from the village of Qara, Hadar Bar-El from Kibbutz Regavim, Leila Kab’a from Barta’a and Sarah Jacobs from San Diego – five out of the dozens of participants in the JITLI project which ended this week.

According to project’s manager, Yaakov Shneiderman, JITLI is “a pressure cooker of Jewish and Arab teenagers from Israel and abroad that turn their communities upside down and work together to change society”. The teens participating are “the leaders of the future” and Shneiderman believes that they – not the politicians – will bring about the change.

Launched eight years ago JITLI brings together high-school students from Israel, San Diego and Mexico for an annual summer camp. The journey begins in the US, passes through Spain, and ends in the Israelis’ home court for eight intensive days of work. “The differences between us are huge,” the teens said, “but the common denominator is even greater. The friendships we made are for life and the change in perception affects all of us.”

Sarah, Leila, David, Hadar and Ala were exhausted from a day’s visit to the ecological farm at Kibbutz Ein Shemer. They gathered at Hadar parents’ house in Kibbutz Regavim to sum up eight days of activities. “I am certain that we, the young generation, will bring about the change. We slowly learnt to see the person beyond the stereotype. I think that is a worthy accomplishment.”

“Initially I was apprehensive,” said Leila, “but during the program I made a lot of friends and found a common language.”

Graduates of the projects also described the effect of it on their communities. This year, for instance, the foundation that runs the project will give $25,000 to each of the communities to fund a joint initiative. Shneiderman, who is very proud of the group, has aspirations for the future: “More than anything else I’d like to see this project grow and reach hundreds and even thousands of teenagers. I wholeheartedly believe this is the way and this is our future.”